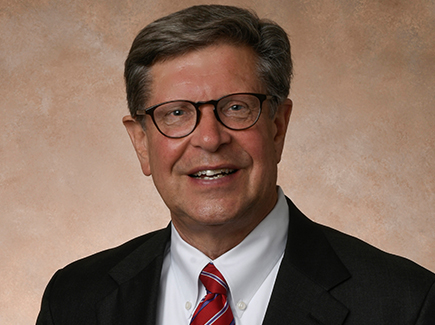 “Every day I get to wake up and lead an organization that has the desire and financial resources to provide a place where everyone, including our employees, customers and community, is treated like family. Our continued success has afforded me the ability to give back to the community in a way that might not have been possible had I chosen a different career path.”

Daunhauer has taken several detours on his road to the retail automotive business. After graduating from Saint Xavier High School in Louisville in 1973, he earned a BS in landscape architecture from the University of Kentucky in Lexington in 1979. He had no plans to work for his family’s car dealership, which was originally founded by his maternal grandfather, Clifford Byerly, in 1944, and later run by his father, John R. Daunhauer Jr., and two brothers, Gregory and John.

After college, he secured a position with a landscape architecture firm in Charlotte, North Carolina, but soon pursued a different calling. “I felt a call to ministry and religious life,” Daunhauer said. “I left my career as a landscape architect and worked for two years with the Christian Appalachian Project doing outreach ministry while discerning my religious vocation.” He later joined the Franciscan order and started the stages of formation, spending four years serving in different areas and studying graduate theology at Catholic Theological Union in Chicago.

“I later felt I was being called in a different direction,” Daunhauer said, and he returned to landscape architecture for a few years before joining his family’s Ford and Nissan stores in 1995. He gained experience in all areas of the dealerships but primarily in the parts and service department and fixed operations. Today, he works with his two brothers and oversees the company’s entire campus, including infrastructure, facilities and information technology.

“There was a time in my life when I considered religious life and now, I am in the automobile business and some would say that they are miles apart,” he said. “I disagree. Both of these careers have given me the opportunity to give back and live a life of service to others.”

And that service extends beyond the dealership walls. Daunhauer is an active member of the Kentucky Automobile Dealers Association (KADA), where he has held numerous leadership positions, including chairman and vice chairman. “Working with state and local officials to ensure that dealers are treated fairly – and that the public has a positive experience in the car-buying process – has fueled my continued commitment to KADA over these many years,” he said.

Daunhauer has also supported the Boy Scouts of America Lincoln Heritage Council, where he has served in many capacities, including council commissioner, and is currently on the executive board. “I find it very worthwhile to be part of an organization that has a mission to help young men and now young women prepare to become responsible citizens and leaders who are guided by the tenets of Scouting,” he said.

For his contributions, Daunhauer received the Silver Beaver award in 2008, which recognizes outstanding volunteerism to the Boy Scouts of America Lincoln Heritage Council. He was also chosen by the group to run an adult leader training course called Wood Badge in 2017. “The six-day training program spread over the course of two weekends consists of a number of leadership training courses that not only apply to Scouting but to business and family as well,” he said. “The part that is very humbling about the entire program is how many lives are touched by just this one course as each participant leads a group of 10 to 30 youths.”

Daunhauer was nominated for the TIME Dealer of the Year award by Gay Williams, president of the Kentucky Automobile Dealers Association. He and his wife, Cynthia, have two children.