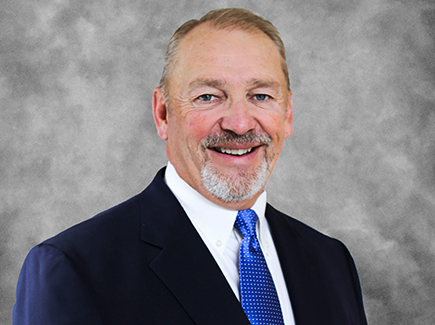 “The retail automotive industry has allowed me to meet so many wonderful people and has enriched my life with a multitude of wonderful relationships, from employees to customers to mentors. I am grateful for the resources afforded me by this business, which has allowed me to use my time and talents to serve my communities.”

Knust earned a BSBA from Creighton University in Omaha, Nebraska, in 1982. After working as a sales rep for Lederle Laboratories in Des Moines, Iowa, from 1983 to 1986, he joined his father’s dealership as a sales consultant.

“My father, Harold ‘Harry’ Knust, purchased a Chevrolet and Oldsmobile store in 1980 while I was a student at college and then added Pontiac and Buick,” he said. Knust took over as sales manager in 1987, then general manager and president in 1989. After buying and selling several dealerships, Knust today owns the Harry K Ford Store that bears his father’s name, as well as two NAPA auto parts businesses and a body shop.

Knust is currently chairman of the South Dakota Automobile Dealers Association and has served the group as vice chairman, district director and on the executive board. He was also a state director for the NADA for more than a decade and worked on numerous committees.

“I was proud to advocate for small and rural dealers on a board that was represented by about 85 percent metro and urban dealers,” he said. “I will be bringing some of the strategies I learned while serving on the NADA board to our state association as I lead that organization over the next two years.”

Knust also applies leadership skills and innovative ideas to tackle problems in his local area. When his son was in 7th grade in 2001 at Chamberlain Middle School in Chamberlain, South Dakota, Knust saw a need for a youth organization that all young men could join, even those who were not athletic. So he established one – the CMS Explorers, a service club for middle school boys that teaches them about selflessness, entrepreneurship and giving back to the community.

The boys raise money by doing chores and developing fundraising programs, and then they decide where those funds are allocated. They have contributed to a new baseball field, soccer field, playground equipment, tree plantings, flag poles, a fishing pier, audio-visual equipment and many other endeavors, as well as helped individuals in need. They also volunteer for service projects at school and in the community and have won numerous awards for their efforts.

Knust still advises the group weekly and prepares a life lesson to present at meetings. “My reward is the relationships I have forged working with these fine young men,” he said. “Many are now married and have kids of their own. I am often sought out at community events or after church by former Explorers who just want to say hi or reflect on their time in the club.”

Knust was nominated for the TIME Dealer of the Year award by Myron L. Rau, president of the South Dakota Automobile Dealers Association. He and his wife, Judy, have three children.