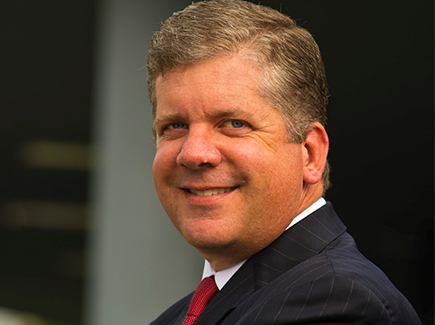 “One of the core values of our business is giving back to our community. I believe we all are part of a larger family and that giving back enriches everyone's lives. This is the most rewarding aspect of my career.”

Doetsch spent time at the dealerships operated by his father, George Doetsch Jr., in Maryland in the 1970s and 1980s, washing cars and working as a lot attendant. During his college years at the University of Oklahoma in Norman, where he earned a BBA in finance in 1991, Doetsch held various jobs in the retail automotive industry before becoming a financial consultant.

“I came to realize that finance was not my true calling,” he said. “I returned to Maryland in the early 1990s to join my father at Monument Ford in Baltimore.” The franchise was later relocated to Columbia and renamed Apple Ford.

“The business has grown exponentially since its early days in Columbia, and now, after reaching our 25th anniversary this year, the dealership is stronger than ever,” he said. “I believe that the dedicated staff of employees surrounding me drives our business success, and that happy employees lead to even happier customers.”

Today, Doetsch is a majority owner of the dealership and continues to work with his father, as well as his son, Edward, who is used car sales manager at Apple Ford Lincoln. They have also added a second dealership in Elkton, Maryland.

Both Doetsch and his father share a passion for giving back to the community and developed a charitable giving program to enhance the quality of life in areas where they do business. “This program is highly lauded and has reinvested upwards of one million dollars annually in Howard County and the state of Maryland,” he said. “I am most proud of all that it does for our local community.”

In 2013, Doetsch and his father were co-honored and named Philanthropist of the Year for a lifetime of charitable giving by the Community Foundation of Howard County, which raises and distributes funds to support nonprofit organizations in the region. “Over the years, our financial contributions and other in-kind gifts have helped support their mission, providing necessary resources to improve lives and enhance the community,” he said.

Doetsch is also proud of receiving the 2012 Howard County Good Scout Award from the Boy Scouts of America in the Baltimore Area Council, National Pike District. This honor, which he also shared with his father, is awarded to individuals who contribute to the community while exemplifying the tenets of scouting.

Beyond his local community, Doetsch has held leadership roles for the Washington Area New Automobile Dealers Association (WANADA), including secretary, vice chairman elect, treasurer and board member. “I have actively supported the mission of the association by advancing the automobile business in the marketplace and advocating on behalf of dealer members, their employees and their customers,” he said. “I know the work we do will have a lasting impact on dealerships, dealers and the thousands of employees that work for them for many years to come.”

Doetsch has also lent his time and talent to the board of the University of Maryland Children’s Hospital in Baltimore (2002 to present); Howard Community College in Columbia (2007 to 2011) and the Howard County Chamber in Columbia (2008 to 2012).

Doetsch was nominated for the TIME Dealer of the Year award by John P. O'Donnell, president and CEO of the Washington Area New Automobile Dealers Association. He and his wife, Kelly, have four children.