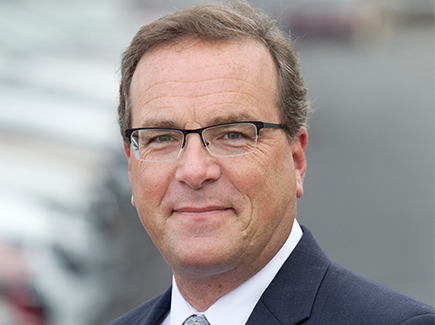 “The opportunity I was given to be a new car dealer and business owner means a lot to me. It is a small club – and it took a lot of hard work and sacrifices, as well as a great deal of luck, to be part of it. All this would not have been possible without my dealer mentors believing in me and giving me a chance.”

A 1981 graduate of Mt. Zion High School in Mt. Zion, Illinois, Maurer began his career in the retail auto industry at Miles Chevrolet in Decatur, Illinois, in 1983. He was there for 10 years and learned different aspects of the business as service porter, customer service manager and service manager.

In 1993, Maurer moved to Dale Willey Automotive in Lawrence, which was originally founded by Dale Willey in 1970 as a Pontiac and Cadillac dealership. He managed the parts and service department, became fixed operations manager and attended the General Motors Dealer Academy in 1996. By 1998, he was general manager and a minority partner.

Maurer became full owner of the dealership in 2014. He has recently expanded the business by adding two stores in 2019: Dale Willey Honda and Dale Willey Chrysler Dodge Jeep Ram, both in Lawrence.

An active member of the Kansas Automobile Dealers Association, Maurer is currently chairman and has served as vice chairman, treasurer and director. “The leadership of the Kansas Automobile Dealers Association has furthered the advocacy and legislative strength for the benefit of all dealers in the state of Kansas, regardless of size or location,” he said.

He also contributes his time and talent to several organizations in Lawrence, including LMH Health (formerly Lawrence Memorial Hospital), a community-owned, not-for-profit medical center. Maurer has supported the hospital’s LMH Health Foundation and hosts the Rock the Block - Kick Cancer event at his dealership. The annual fundraiser celebrates cancer survivors, those fighting the disease and caregivers, with the proceeds going to support LMH Health cancer patients.

Maurer has also participated in the Penny Jones Open Golf Tournament and Pink It Up, a program that asked businesses to display as much pink as possible during October, Breast Cancer Awareness Month, to benefit the hospital. For his ongoing support of LMH Health, Dale Willey Automotive received the 2015 Elizabeth Watkins Community Caring Award from the LMH Health Foundation.

“This award is most meaningful to me,” Maurer said. “It recognizes volunteerism and philanthropy, and I have enjoyed being a part of community events for the hospital.”

A benefactor of the Corpus Christi Catholic School in Lawrence, Maurer has donated vehicles for the school’s fundraising raffle. He and his wife, Kristin, were named 2018 Dorothy Flannery Honorees for their support of the parish school.

Maurer was nominated for the TIME Dealer of the Year award by Don McNeely, president of the Kansas Automobile Dealers Association. He and his wife, Kristin, have one son.