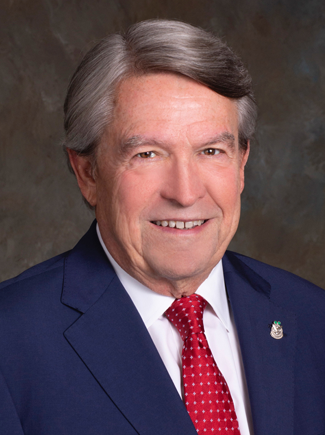 “A most gratifying part of my career has been meeting people and having the good fortune of becoming friends with so many. I have hired young people from trade school and watched them progress to owning their own businesses.”

Caldwell earned a B.S.B.A. from Henderson State University in Arkadelphia, Arkansas, in 1969, and served in the Arkansas Army National Guard from 1970 to 1976. His first job in the retail automotive industry was at Hope Auto Company, a Ford franchise, in Hope, Arkansas, when he was 14 years old.

“I worked all Saturdays, holidays and summer breaks, opening and closing the front manual doors to the service department during the winter and the wash rack during the summer."

His hard work obviously made an impression, as Caldwell was hired in sales full-time upon graduating from college. He would stay with Hope Auto Company for 15 years, rising to the position of general manager by 1972 and purchasing stock in the company.

In 1984, Caldwell moved to McLarty Management Company, in Little Rock, Arkansas, as vice president, overseeing four dealerships. “My father went to work for Frank McLarty to start his automotive career in 1955. I then went to work for Mr. McLarty's son, Mack, and began a 30-year career partnership with my high school teammate.”

Caldwell oversaw acquisitions and expanded dealership holdings for the company and in 1999, the McLarty stores were sold to Asbury Automotive Group. By 2002, Caldwell and his son, Jay, purchased the Toyota franchise in Conway and renamed the dealership Caldwell Toyota.

“By far, the most rewarding aspect of my career has been mentoring my son and watching him grow in the automobile business.”

In 2008, the Caldwells supervised the construction of a new dealership that achieved LEED (Leadership in Energy and Environmental Design) Gold certification by integrating many conservation and energy-saving features, including roof water runoff collection for landscape irrigation; water recycle system for the car wash; and extensive use of recycled and rapidly renewable materials.

Caldwell is an active advocate for the retail automotive industry and has served on the NADA Board of Directors, the Arkansas Motor Vehicle Commission, as well as holding numerous leadership positions for the Arkansas Automobile Dealers Association.

“I tackled many issues that impacted our industry directly and worked with local and national leaders to protect consumers, manufacturers, dealers and the future of the dealer franchise system.”

Caldwell also cares about his community and has supported many local schools, sporting events and organizations that benefit the youth of Conway and the surrounding area. And while he has sponsored and participated in numerous charitable initiatives, the most important to him is AEDD (Arkansas Enterprises for the Developmentally Disabled) in Little Rock and Life Styles in Fayetteville, Arkansas. These two organizations help adults with disabilities live more independent lives.

“My grandson has special needs and is a client at Life Styles. They have opened up a new world for him by allowing him to become more integrated into all aspects of society. I feel that I have been rewarded in more ways than I could ever repay or contribute back to these two wonderful programs.”

Caldwell was nominated for the TIME Dealer of the Year award by Greg Kirkpatrick, president of the Arkansas Automobile Dealers Association. He and his wife, Mary Beth, have three children.