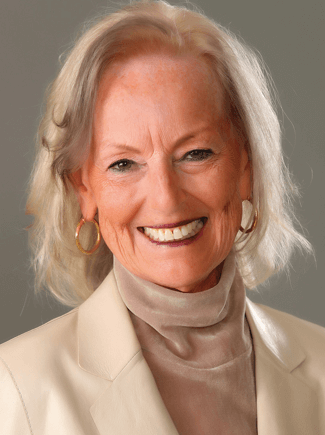 “I love the car business, and I love the different challenges that I continue to face. A dealership can never rest; it has to always be willing to change and evolve. But it also needs to remember its history – where it came from and the foundation on which it is built.”

Gaddie earned a B.S. from the College of St. Scholastica in Duluth, Minnesota, in 1971, and settled into life as a teacher in East Grand Forks, Minnesota. In 1983, her husband, Michael, was asked to join Jim Ryan Chevrolet, her father’s namesake car dealership in Minot, and learn the business.

“I also joined the dealership in 1985, making customer satisfaction calls. From there, I moved into marketing, with little but my speech and theater major to guide me. It was enough to become the face of Jim Ryan Chevrolet. From that moment, I was hooked on the automobile industry.”

Gaddie later transitioned into sales management and in 1996, she was named dealer operator. When her father officially retired in 2000, she took the reins and oversaw the day-to-day operations of the store.

“My father was my mentor. As he stepped into retirement, my husband and I were able to build upon the successful and profitable dealership that laid the groundwork for where we are today. He taught me so much about hard work, expense control and treating other people the way you want to be treated.”

The Gaddies developed an expansion plan and added several stores to the Ryan Family of Dealerships. Most were dealerships that they acquired and turned around, but in 2015, they opened a new Nissan store in Minot, which they launched from the ground up. Today, they oversee five dealerships in Minot and Williston, North Dakota, representing brands Buick, Cadillac, Chevrolet, Chrysler, Dodge, GMC, Honda, Nissan and Ram.

“We have worked hard to make the Ryan Family Dealerships successful, profitable and customer-focused. I want to carry on my father’s legacy and by mentoring a number of employees, including my three children and son-in-law, I know we will remain successful and relevant for many years to come.”

Gaddie served as chair of the Automobile Dealers Association of North Dakota from 2018 to 2019. During her tenure, she reworked the number of board members, changed the length of service and pared down the board meeting schedules to ensure a more efficient, less time-consuming experience for dealers. “I feel these changes are going to make it much easier for the board to recruit good members.”

In the area of community service, Gaddie has a longtime association with Kalix in Minot, which works to create employment for people with special needs and assists them in living more independently. “I have served on the Kalix board for 28 years, 10 years as chair. I am always impressed by the great work they do.”

In addition, Gaddie contributes her time and talent to the board of the Bishop Ryan Catholic School Foundation in Minot and is a trustee for the University of Mary in Bismarck, North Dakota. She also donates Chevrolet pickup trucks to Farm Rescue, a group that assists farmers and ranchers who encounter an unexpected injury, illness or natural disaster and need help to keep their operations running during the crisis.

“Giving back to my community through time and charitable giving has been an important part of my life.”

Gaddie was nominated for the TIME Dealer of the Year award by Matthew Larsgaard, president and CEO of the Automobile Dealers Association of North Dakota. She and her husband, Michael, have three children.