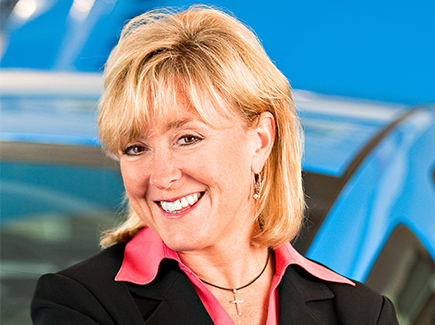 “Growing up in the car business created a sense of appreciation of the hard work, integrity and dedication that my father, Earl Tindol, demonstrated daily. And by watching his efforts in the community, I learned the value of making a difference in the lives of others.”

Tindol did not plan to enter family business, which was founded in 1974 when her father acquired the Ford dealership in Gastonia. After earning her BA in recreation administration from the University of North Carolina at Chapel Hill in 1987, she headed to Florida to work in a resort with the goal of becoming a cruise director.

“I worked in the dealership to earn some extra money and soon realized that the car industry was much more than just cars,” she said. “Instead, it was helping the people that bought the cars as well as the employees that worked hard at the store to make that happen. It was about making a difference in other people’s lives.”

For the next eight years, Tindol experienced every position and every department in the dealership. She was promoted to general manager in 1995 and, when her father retired in 2002, she took over the business.

“I bought the store and never looked back,” she said. “With the help of countless people, my dreams have come true, as I am the cruise director of our store. I have fun helping our community, and I try every day to do things that make a positive difference for others.”

Tindol is active in both her state and local dealership associations, having served as chair, vice chair, secretary and treasurer of the Greater Charlotte Automobile Dealers Association, as well as chair of the group’s annual Charlotte International Auto Show from 2011 to 2013. “The proceeds from this event allow us to deliver more than $300,000 each year to nonprofits in our area, including the YMCA, Boys & Girls Clubs of America, food pantries, shelters and many others,” she said. “These funds make a huge difference in the lives of countless Carolinians.”

Also, Tindol was one of the founders of the North Carolina Hometown Heroes program, created by the North Carolina Automobile Dealers Association, which honors first responders and members of the military. “We have hosted several events and dedicated an entire wall in our showroom for these heroes to sign their names in honor of their service to others,” she said.

A member of the Gaston County Education Foundation since 2000, Tindol is proud of the group’s support of teachers. “We fund more than $50,000 in teacher grants each year,” she said. “The difference that this funding will make in the generations ahead may create the largest impact of all.”

Tindol has served on the board of the Gaston County YMCA since 2014, where she is also a group fitness instructor. She was troop leader for the Girl Scouts Carolinas Peaks to Piedmont Council for more than 13 years and even brought members of her troop to Costa Rica to deliver school supplies and improve schools thanks to a grant from the North Carolina Automobile Dealers Association.

For her community involvement, Tindol has won numerous awards but was most proud to be named a Salute to Dealers honoree by the Ford Motor Company in 2017. This prestigious award recognizes dealers that utilize their resources and time to help those in need. “To be one of only six honorees from across the globe is extremely humbling,” she said. “Through it all, the gratitude I have for my father in allowing me the opportunity to lead our dealership and employees, is the foundation for all that we have done in the community.”

Tindol was nominated for the TIME Dealer of the Year award by Robert Glaser, president of the North Carolina Automobile Dealers Association. She and her husband, John Davis, have four children.