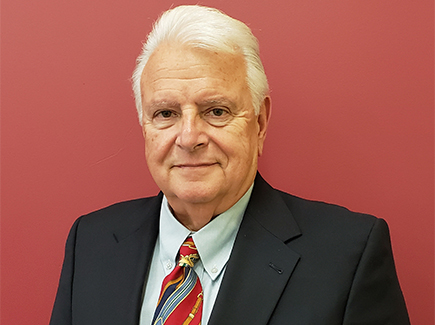 “Our philosophy is simple: AutoServ is successful because we are a part of a community, not just an address. Caring is infectious and it is conveyed to all through our excellent staff.”

A 1963 graduate of Wentworth Institute of Technology in Boston, Massachusetts, Gaudet began his career in the auto industry at Nassar Ford in Lawrence, Massachusetts, where he started as a salesman in 1965. “My wife and I were expecting our first child and car sales seemed a bit easier than working as a construction laborer in a flat market,” he said.

Gaudet rose quickly through the ranks and became general manager while helping the dealership grow to become a major Boston-metro Ford store. “When our three children were in high school and looking onward to college, my wife and I felt secure and we began to look for ways to give back,” he said. “We opened our hearts and home to a young foster child we had read about in our local paper and soon adopted her into our family.”

His older son joined Gaudet at the dealership following college, and in 1990, he decided it was time to open his own store. “I cashed in my retirement and chased my dream,” he said of the purchase of a Ford, Chrysler and Dodge store in Tilton. Today, the business has grown to include Jeep, Nissan, Ram and Volkswagen, plus AutoServ Kia and an Allstate insurance agency. Three of his children, his two brothers and oldest grandchild are part of the family enterprise.

“Our success is attributable to our team,” Gaudet said. “We employ roughly 200 people who proudly commit themselves to our growth and success every day. We arm them with the best in tools, training and technology to grow professionally, and we treat everyone with respect and encouragement.”

The dealership itself is an amenity-rich oasis, featuring a café, fully equipped gym with a trainer for exercise classes and a lactation lounge. “We foster a culture of caring for each other and our surrounding communities,” Gaudet said.

To that end, he was instrumental in establishing and funding a new location for the Boys & Girls Club of the Lakes Region, which was being evicted from its rented headquarters and moving to the basement of a vacant church. He rallied family, friends and neighbors to raise the funds to purchase and sustain a permanent home for the group in Laconia, New Hampshire.

“Our community has struggled with an epidemic opioid crisis leaving children victims in its wake,” Gaudet said. “Our local Boys & Girls Club is described by many members as the only place they feel safe. We not only purchased a suitable home for the organization which it could own debt free, but we also built a $2 million endowment to ensure that it would remain the club’s forever home.”

“Personally, through the dealership and our family foundation, we have given away more than $1 million over the past five years to a myriad of worthy causes from combating social challenges like addiction and homelessness to children's charities, religious organizations, youth sports and service clubs,” Gaudet said.

He has received numerous awards for his community work and added, “We are inspired most by the willingness of our team to follow through with our customers and to share their own time and success through community volunteerism.”

Gaudet was nominated for the TIME Dealer of the Year award by Peter McNamara, president of the New Hampshire Automobile Dealers Association. He and his wife, Brigid, have four children.