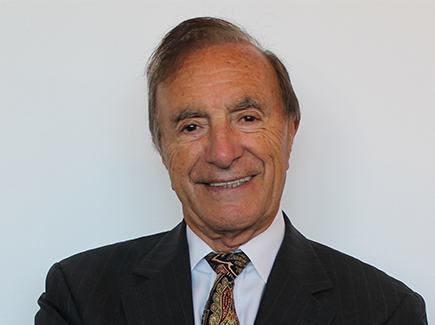 “This wonderful industry has helped me live the American dream. I grew up with very little, but I now am able to give back in so many ways to help people who need a hand or need to be lifted up. I count my blessings every single day.”

Ciccolo, who came from humble beginnings in Cambridge, Massachusetts, took a chance on a struggling dealership in 1963. “I walked into the store looking to buy a used car and the store manager pitched me on the idea of buying the dealership,." At the age of 25, he entered the retail automobile business, launching his first Volvo/Nash store.

While the Swedish import was not well-known in the United States at that time, Ciccolo understood the product’s quality and huge potential. The young entrepreneur launched a business that today includes six Massachusetts new car dealerships in Boston, Norwell, Newton and Danvers, representing brands Audi, Honda, Hyundai, Nissan, Porsche and Volvo.

“You can always get someone to try a new thing, but you have to give them good reasons to come back,” Ciccolo said, so he made sure his stores offered a great buying and service experience.

And that meant providing a workplace where employees were happy and could reach their full potential. “Our environment helps people evolve and grow and be a success – to be more than they could have dreamed – and that is what I take the greatest pride in,” he said.

Ciccolo earned a BS at Suffolk University in 1959 and an MBA from Northeastern University in 1982, both in Boston, and served in the United States Marine Corps Reserve from 1955 to 1962. He also completed a management program at Harvard Business School in Boston in 2003.

As a longtime auto industry leader, Ciccolo is proud of his work for both the state and national dealer associations. He was a director for the NADA after the economic crisis of 2008, a critical time for the auto industry. “I went to Washington, D.C., and met with Representative Barney Frank of Massachusetts and other legislators to advocate for dealers during the creation of the Consumer Financial Protection Bureau via the Dodd-Frank Act,” he said. “I am incredibly gratified that we were able to have some success in ensuring that dealers weren’t over-regulated through the bureau.”

Another cornerstone of his company’s longevity is a commitment to giving back. “From day one, my belief has been that our stores should be active participants in their communities, pitching in and making a difference,” Ciccolo said.

To that end, he has supported countless organizations, causes and events, and created the Ciccolo Family Foundation for charitable giving. Since 1983, he has served on the board of the Global Smile Foundation, which provides comprehensive cleft care for patients in underserved communities throughout the world. He is also an active member of the Alliance for Children Foundation, a Massachusetts-based international relief organization that aids orphaned and at-risk children worldwide.

Other initiatives that Ciccolo champions include the Boston Volvo Thanksgiving 5K (which has raised over one million dollars for the National Multiple Sclerosis Society); Friends of Herter Park (a community group which is working to reactivate the public spaces and an amphitheater in a park along the Charles River in Allston, Massachusetts); Maine Coast Heritage Trust (conservation campaign); Make-A-Wish; The Salvation Army; Greater Boston Food Bank, as well numerous hospitals, universities, scholarship funds and charities.

Ciccolo was nominated for the TIME Dealer of the Year award by Robert O'Koniewski, executive vice president of the Massachusetts State Automobile Dealers Association. He and his wife, Grace, have three children.