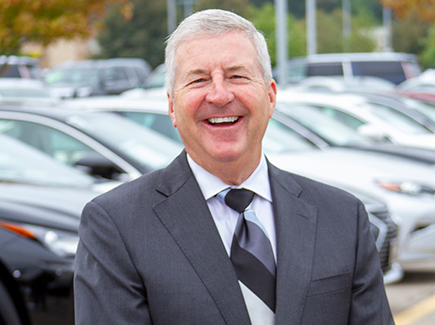 “We’re not in the car business, we’re in the people business. That’s our mantra, and I've built my company on putting people first. This is true for our employees and it's right for our guests.”

Willis hails from Delaware, where his father, Bill Willis, owned a Chevrolet dealership in Smyrna. “I started washing cars at the age of 8 in 1960 for five cents per vehicle,” he remembered. “During high school, I did various jobs at the store and, from that point on, I knew I wanted to be a car dealer.”

He left Delaware in 1970 to attend Simpson College in Indianola, Iowa, where he earned a degree in business administration, expecting to return to work with his father and two brothers at the Smyrna store. In 1972, the course of his life would change, when his father ran into Des Moines dealer Charlie Betts Jr. at a General Motors meeting in Detroit. Betts told his father that Willis could work part-time at his store while at college, and Willis has been there ever since.

“Divine intervention would guide my life, as Mr. Betts' dealership was just 20 miles away from Simpson College,” he said. “And I'm excited that my two sons, Matt and Jason, have spent years of succession planning and working within the business to become partners with me for the future.” Today, Willis Automotive encompasses XX new car dealerships in the Des Moines area, selling brands Cadillac, Infiniti, Jaguar, Land Rover, Lexus, MINI and Volvo.

An active member of the Iowa Automobile Dealers Association, Willis has held numerous leadership positions, including chairman, vice chairman, secretary and board member for the Iowa Automobile Dealers Foundation for Education. He has also served on the boards of Simpson College; John Stoddard Cancer Center (Des Moines); the Greater Des Moines Committee and the National Kidney Foundation, among others.

Willis also supports charities and organizations that strengthen the community, economy and quality of life in the Des Moines area. He is a title sponsor of the Willis Broadway Series for Des Moines Performing Arts, which brings world-class productions to the local stage. “This partnership has spanned 15 years and has resulted in millions of dollars of economic impact in Central Iowa,” he said. “In addition, when my wife, Kim, and I chaired the United Way of Central Iowa campaign in 2017, we raised more than $27 million for local charities.”

Willis has earned numerous awards but is most proud of being inducted into the Iowa Business Hall of Fame in 2018 by the Greater Des Moines Committee. “To be nominated and inducted by other business leaders into this distinguished league was never a thought in my mind,” he said.

He added, “When you genuinely care for people, they will take care of you. We’re really in the people business, and oh – by the way – we sell and service vehicles.”

Willis was nominated for the TIME Dealer of the Year award by Bruce Anderson, president of the Iowa Automobile Dealers Association. He and his wife, Kim, have two children.