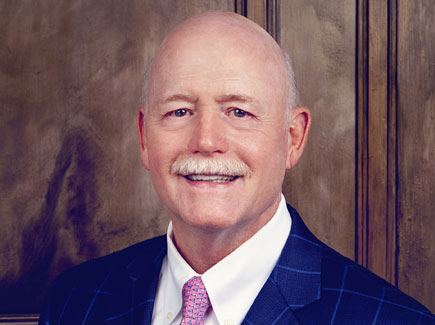 “I love my family and I appreciate the confidence they had in me at 47 years old when I left a lucrative sales job to realize my dream of owning a car dealership. They believed in me and knew it would work even during my times of doubt.”

Watkins attended Samford University in Birmingham, Alabama, and was a loan officer at a bank when he decided to begin selling cars. “The thought of being given a new Datsun B210 as a demo and a guaranteed income for six months was worth the risk,” he said. “So I gave it a try and 43 years later it is still working.”

His first job in the industry was at a Pontiac dealership in Birmingham, where he excelled in sales and his income began to rise. He then made the decision to commit to a career in the car business, among other things. “A young, beautiful registered nurse came into the dealership in 1979 and bought a new car,” he said. “With good sales skills, we were married in 1981.”

Watkins moved to several dealerships in Birmingham before settling at Edwards Chevrolet in 1983, where he spent 15 years and rose to general sales manager. “Mr. Leon Edwards was my mentor and provided me with many great opportunities, as well as the training and expertise I needed to run my own dealership,” he said.

In 1998, he took that fateful leap and cashed out his savings and retirement fund to move his family to Gadsden and establish Ronnie Watkins Ford – all with the blessing of his wife, Lynn. “My wife reminded me of my dream and sacrificed security so that I could follow it,” Watkins said. “While I had the drive and desire to succeed as a dealer, I credit Lynn with making it a reality.” Today, two of his daughters and his son-in-law work in the family enterprise.

Watkins brings that same entrepreneurial spirit to his community activities. In 2005, he worked with the Greater Gadsden Housing Authority to create and fund the ESTEEM (Encouraging Students to Exhibit Excellent Minds) program, which is designed to build self-esteem and provide meaningful incentives to children living in government-assisted housing who excel in school.

“I was originally asked to donate funds for small pizza parties for the students who were on the A and B honor roll as an incentive,” he said. “But I suggested we expand the idea and reward students with special life experiences in Gadsden and beyond.”

Watkins notes that the children have gone to restaurants, theaters, museums, amusements parks and many other places that they may not have had the opportunity to visit. “ESTEEM has succeeded in encouraging students to work harder,” he said. “It means a lot to me as I have seen the difference it has made in the children’s lives over the years.”

He has also furthered the cause of education by serving on the board of trustees for Samford University since 2001. In addition, Watkins has provided vehicles for driver’s education classes at area schools, donates to several college scholarship funds and participates in Ford Drive 4 UR School, a program that generates money for local schools when test drives are taken.

For his philanthropic contributions, Watkins has received numerous awards, including the prestigious Salute to Dealers honor from the Ford Motor Company in 2011, which recognizes dealers who dedicate their time and resources to improve their community.

Watkins was nominated for the TIME Dealer of the Year award by Thomas R. Dart, president of the Automobile Dealers Association of Alabama. He and his wife, Lynn, have three children.