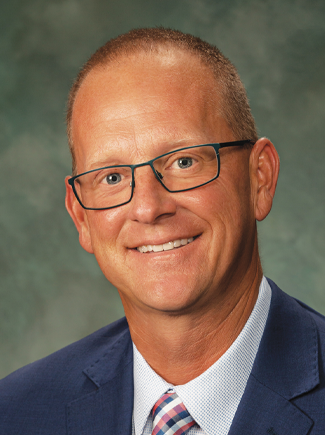 “The automotive business is a people business, and I really enjoy interacting with our customers. The purchasing of a new or newer vehicle can be stressful, and I like making the process easier.”

A 1992 graduate of Albion College in Albion, Michigan, where he earned a degree in economics and management, Cargill started his career as a comptroller trainee at Serra Automotive in Grand Blanc, Michigan. “After eight years working as an accountant, I realized I wanted to be a general manager someday."

Cargill decided to shift his focus to sales and graduated from the NADA Academy in 2000. He joined the White Family Dealerships in 1995 in Columbus, Ohio, moving to the company’s Casper, Wyoming, store in 1998, where he worked as a general sales manager before rising to general manager of a newly acquired dealership in Gillette in 2003. Since 2008, he has served as executive manager of White’s Frontier Motors and has a partnership stake in the business.

“I have taken an unusual path in my automotive career. Few people start in accounting and move to sales. However, I believe it has made me very well-rounded in all aspects of dealership operations.”

Cargill credits hard work and a full-steam-ahead approach for his continued success in the car business. “I have definitely spent many hours at the dealership, and I have continued to learn. I have also tried to surround myself with talented people and allow them to do their respective jobs.”

Since June 2019, Cargill has served as president of the Wyoming Automobile Dealers Association and has held various leadership positions within the group, including vice president and director. As president, he has traveled throughout the state to hear and address the concerns and challenges of dealers.

“I listen to their issues and try to find solutions to their problems. I believe I have brought a steady hand to the association this year when dealing with the coronavirus. We have made sure all dealers are informed on government regulations concerning how to open and how to conduct business once they are open. And we also provided dealers with information on government assistance during the pandemic.”

Cargill’s leadership skills also extend to his community. He is currently a board member for the Gillette College Foundation and supports the school’s booster club as vice president, as well as having served on the board of the United Way of Campbell County from 2015 to 2019. Each year, his dealership participates in Paint Gillette Pink, an initiative that promotes breast cancer awareness and raises funds for the Campbell County Healthcare Foundation’s Cancer Care Committee.

“For the past five years, we donate $100 for every car we sell during the month of October to Paint Gillette Pink. Last year’s check was for $10,000, which helps local cancer patients with whatever financial needs they may have. This program has a large and direct impact on our local community.”

“I’ve been asked how I can afford to be involved in so many great local causes. I want my customers to know that when they spend their money at our dealership that we will give back to our community. We want to be involved in everything, and I take great pride in helping in any way we can.”

Cargill was nominated for the TIME Dealer of the Year award by Marsha Allen, executive vice president of the Wyoming Automobile Dealers Association. He and his wife, Lori, have two children.