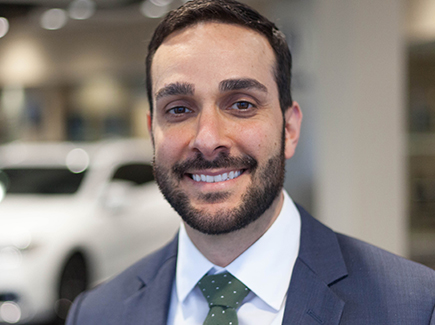 “My team members and my community are my extended family, and their happiness in life is my greatest professional reward,”

A 2004 graduate of Maryville University in St. Louis, where he earned a BSBA, Brown began his career in the auto industry in 1998 working as a lot porter at his grandfather’s dealership, Frank Leta Honda in Bridgeton, Missouri.

“When I turned 16, I worked part-time during the school year and full-time during the summers until I graduated from college in 2004,” he said. “By the time I graduated, I had fallen in love with this business and wanted to make a career out of it in some capacity.”

Brown also attended the NADA Academy in 2006 and has worked in 10 different positions throughout the dealership, gaining invaluable experience that he believes has contributed greatly to his success. He assumed the role of general manager of Frank Leta Acura in 2008.

“My firsthand knowledge of the many positions within the dealership has made me better at hiring, training and motivating my team members,” he said. “It has also shaped my values, and as such, it has shaped the vision and focus of our company.”

And, according to Brown, that vision is focused on positively impacting the lives of team members, clients and the community. He is proud that 100 percent of senior managers were promoted from within his dealership and that he has worked to improve company benefits and perks. For his community, Brown was the force behind creating the Frank Leta Charitable Foundation in 2016.

“The purpose of our foundation is to provide safe, reliable transportation to those in need,” he said. “We donate a portion of our profits every year to this foundation, and we also host an annual fundraising golf tournament for its benefit. As a result of our efforts, we have helped provide transportation to more than 50 individuals and charities.”

Recipients have included Divine Nest (an adoption, foster care and parenting support group based in Moscow Mills, Missouri); Epworth Children & Family Services (provides youth development services to St. Louis community); World Bird Sanctuary (305-acre reserve in Valley Park, Missouri) and Stray Rescue of St. Louis, to name a few. And, for the past three years, the foundation has donated a car to the Boys & Girls Clubs of Greater St. Louis, which is presented to the organization’s Youth of the Year.

“I have worked primarily with other nonprofits through our company's charitable foundation,” Brown said. “I do this because I feel that it engages my team members in the end result of our vision statement – to impact the lives of those in our community.” To that end, his dealership is one of the top fundraising teams for the Leukemia & Lymphoma Society's Light the Night walk in St. Louis. Brown says he has a personal connection with this particular charity, as he was diagnosed with leukemia and lymphoma in 2018.

Brown has also contributed his time and talent to the Missouri Automobile Dealers Association (MADA), having served in several leadership positions. “I assisted MADA as they navigated through some difficult legislative challenges, including Tesla, sales tax issues and franchise law changes, as well as assisted in the formation of a new entity within the association that dealt with dealership vendor partnerships,” he said.

Brown was nominated for the TIME Dealer of the Year award by Doug Smith, president and CEO of the Missouri Automobile Dealers Association. He and his wife, Melissa, have three children.