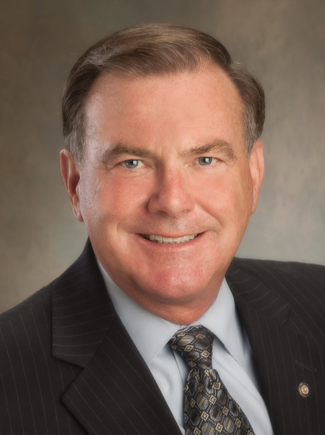 “I literally grew up in the car business and never once considered doing anything else. I am a third-generation dealer, and my dad taught me that commitment to family and community is the most important thing. This is the business model I follow and what has gotten me to where I am today.”

Crenwelge received a B.B.A. from the University of Texas at Austin in 1981 in preparation for his career at the family store. “When I was 13 years old, my father told me it was time to start working at the dealership, so I began by washing cars and eventually gained experience in every department, except sales, by the time I graduated from high school.”

During college, Crenwelge learned the sales side of the business and once he returned to the dealership full-time after graduation, he attended a Chrysler training program for children of dealers. His father then purchased a second dealership in Fredericksburg, Texas, and Crenwelge was named general manager of the Kerrville store. In 1982, Crenwelge himself had the opportunity to purchase a local GMC dealership. “I became the youngest General Motors dealer in the United States at age 23."

With such a rich history in the retail automobile industry in his state, Crenwelge has devoted a great deal of time and talent to the Texas Automobile Dealers Association, having served the group continuously for more than 30 years in various capacities, including area director, district director, vice chair and, currently, trustee for the Texas Dealer Academy, which he considers his greatest achievement for the group.

Crenwelge founded the academy in 2010 to create a structured program of educational and operating training for sons and daughters of Texas auto dealers and other employees who are identified by the dealers as tomorrow’s leaders in the industry.

“It has been a labor of love for me to make decisions that have an influence on the future of my family and the families of my fellow dealers. As a third-generation auto dealer myself, I understand the importance of grooming eventual successors and providing them with the tools and knowledge necessary for success.”

For spearheading this valuable program and for his efforts in advancing higher educational opportunities through the Hill Country University Center in Fredericksburg, Crenwelge received the Northwood University Dealer Education Award in 2016.

He is equally committed to making a difference in his community. After watching a presentation by a developer for a hotel on Marktplatz (Market Square) in Fredericksburg, Crenwelge decided to run for city council, and later mayor, to help curtail further commercialization of the property and maintain the quality of life in the area.

“During my 20-year tenure on council, we returned this land to its originally intended purpose as the cultural and recreational focal point of our community.” He was also instrumental in the successful renovation of the historic St. Joseph Halle, one of the last historical buildings remaining to be restored in town.

“I served on the capital campaign that raised the $3 million to restore the structure to its original grandeur and today, it serves as a beautiful performance and event venue."

Other groups that he has supported and served include: Gillespie County Historical Society; City of Fredericksburg Market Square Redevelopment Commission; National Museum of the Pacific War (Fredericksburg); Community Foundation of the Texas Hill Country; Kerrville Noon Rotary Club; and many others.

Crenwelge was nominated for the TIME Dealer of the Year award by Darren Whitehurst, president of the Texas Automobile Dealers Association. Crenwelge is the father of three adult children, Katherine, Jacquelyn and Aaron, each of whom have worked at the family dealerships over the years. His two youngest children are still in college at this time.