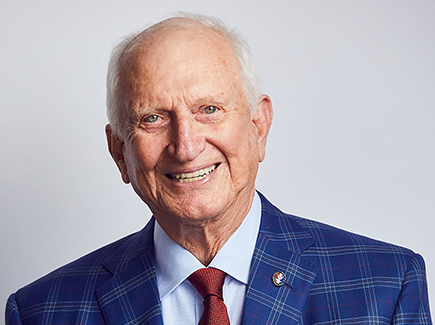 “We have been extremely successful in serving the automobile needs of individuals and families in Lebanon and beyond the Middle Tennessee region. Our success has allowed me and my family to give back in so many ways.”

A second-generation dealer, Bone began his career as a teenager washing cars in his father’s Lebanon store, originally founded in 1927. “At the time, I was paid in nickels and dimes out of the Coke machine,” he said. “But the value of a job well done made it seem like riches.”

Bone graduated from Castle Heights Military Academy in Lebanon in 1958 and served in the United States Army from 1958 to 1962, as a cryptographer, cryptanalyst and a military intelligence specialist, completing tours in Japan, Korea and Germany. He then earned an associate of arts degree from Cumberland University, also in Lebanon, in 1964, and a Bachelor of Arts degree from Centre College in Danville, Kentucky, in 1966.

In 1969, Bone returned to Wilson County Motors to continue his father’s legacy. “Spending time with all of the employees and learning the ins and outs of the dealership allowed me and the company to provide the best services possible to our customers and the community,” he said.

Over the years, he expanded the business, which now also includes Wilson County Hyundai, and is committed to providing an excellent and memorable guest experience and quality workplace. “I think of our relationship with the customer as the ‘special sauce,’” he said. His two sons, Mitchel and Paine, will be the next generation to take over the family business.

A supporter of educational initiatives, Bone has served as chairman of the board of trust for his alma mater, Cumberland University, since 2016. “As chair, it is a thrill to be a key part of the leadership of this university during some of its most exciting years ever,” he said. “The school, now in its 177th year, recently set a record in enrollment.”

Bone also co-founded the Wilson County Teacher of the Year program, which recognizes and rewards the best and brightest educators in the public and private schools of Wilson County. “For 21 years, we have honored and provided awards to more than 500 of our hardworking teachers,” he said.

He has lent his time and talent to the Rotary Club of Lebanon, where he is a Paul Harris Fellow, Boy Scouts of America and the First Presbyterian Church in Lebanon, to name a few. “We continue to strive to be our best in our philanthropic game because we like to consider our business a part of our Tennessee family,” Bone said.

Bone was nominated for the TIME Dealer of the Year award by Bob Weaver, president of the Tennessee Automotive Association. He has five children.