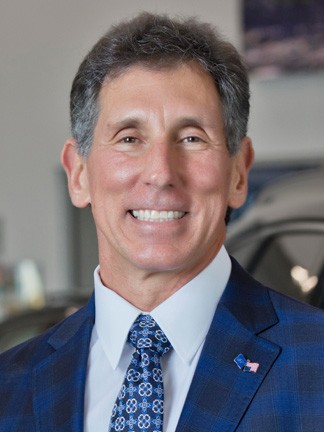 “My employees are the backbone of my success, and I have extremely loyal and hardworking employees. I receive many accolades as the owner, but without their day-to-day commitment and efforts, I would not be where I am today, and I am beyond grateful.”

(New York, NY, October 18, 2022) – The nomination of Gary Rome, dealer principal at Gary Rome Hyundai in Holyoke, Massachusetts, for the 2023 TIME Dealer of the Year award was announced today by TIME.

Rome is one of a select group of 48 dealer nominees from across the country who will be honored at the 106th annual National Automobile Dealers Association (NADA) Show in Dallas, Texas, on January 27, 2023.

The TIME Dealer of the Year award is one of the automobile industry’s most prestigious and highly coveted honors. The award recognizes the nation’s most successful auto dealers who also demonstrate a long-standing commitment to community service. Rome was chosen to represent the Massachusetts State Automobile Dealers Association in the national competition – one of only 48 auto dealers nominated for the 54th annual award from more than 16,000 nationwide.

“My employees are the backbone of my success, and I have extremely loyal and hardworking employees,” nominee Rome said. “I receive many accolades as the owner, but without their day-to-day commitment and efforts, I would not be where I am today, and I am beyond grateful.”

A 1983 graduate of Ithaca College in Ithaca, New York, where he earned degrees in business administration and political science, Rome always knew he wanted to follow his father, Jerry Rome, into the car business.

“As a young child, I woke up early on Saturday mornings and would chase my dad out the door, begging to accompany him to his Datsun dealership for the day,” he said. “I connected with him most at work and learned the business from the bottom up.”

After attending the NADA Academy in 1984, Rome became general manager of his father’s Nissan store (formerly Datsun), a position he held for many years. When the Nissan dealership was relocated to West Springfield, Massachusetts, Rome purchased the original building from his father and founded Gary Rome Hyundai in 1997 in Holyoke.

“My childhood dream of owning my own franchise came true,” he said. “The automotive business is 24/7 and even as a young man, I went to bed on Sunday night and couldn’t wait to get back to the dealership early on Monday morning.”

Today, the Gary Rome Auto Group also includes Gary Rome Kia of Enfield in Enfield, Connecticut. Rome attributes his business success to his credo of treating both employees and clients like family.

“My father began it all with a smile back in 1958 when he sold and repaired cars out of his home's garage in Holyoke,” he said. “His memorable quote, ‘Gary, it doesn't cost any extra to be nice,’ has been ingrained in me since day one.”

Rome has strived to make his dealerships a welcoming haven for both employees and customers; so much so that he appointed one of his staff accountants as a corporate cultural officer, known as “Captain Culture.'' He works closely with Captain Culture and together, they engage the team by celebrating milestone events, holding monthly raffles and hosting themed luncheons for the group. His two Vizsla dogs, Jack (age 13) and Daisy (age 2), who star in his commercials and are local celebrities, greet guests as ambassadors on-site. Rome also handwrites birthday and work anniversary cards for every employee at the beginning of each month.

“My employees and I go the extra mile to make everyone that walks through the doors feel special,” Rome said. “I've always enjoyed talking to people and getting to know their life stories, so I introduce myself to everyone I meet.”

Beyond his customer-focused successes, Rome is also committed to embracing new technologies that will move his dealerships – and the auto industry – forward. His state-of-the-art Hyundai store is fueled by a solar field that he owns, and he has increased investment in EV infrastructure and inventory. He is the president of the Hyundai Dealers Advertising Association and has served on national dealer councils for 16 years.

“I have always been extremely active in soliciting input from my local constituent dealers and conveying that message directly to national management,” Rome said. “My involvement has benefited the dealer body as a whole, and I have been able to impact dealer cash programs and pilot many new incentives.”

Rome has parlayed his local celebrity and media connections to benefit numerous groups and organizations. He sells stuffed animal “Jack Rome” dog dolls at the dealership with the proceeds donated to the Dana-Farber Cancer Institute’s Jimmy Fund. For his Drive Pink campaign, he donates $5 for every pink license plate frame installed on a car, raising money for breast cancer research. And he was recently named eastern region board member for Hyundai Hope on Wheels, the initiative that raises funds for pediatric cancer research.

“I initiated a month-long awareness campaign with ABC, CBS and Fox Networks where the weather was broadcasted live alongside the local dealers and the Hyundai Hope on Wheels vehicle during the month of September, childhood cancer awareness month,” he said. “Community philanthropy is a way of life for me, and I am committed to making a difference.”

To that end, he is also actively involved in groups that better the city of Holyoke and his neighbors. Rome is a board member for the Holyoke Community College Foundation and tri-chairman of the College’s $15 million campaign. He supports the Greater Holyoke Chamber; Ronald McDonald House of Springfield; Holyoke High School Dean Campus; Children's Museum at Holyoke; Homework House of Holyoke; and many others. He also hosts events at his dealership locations, including fundraisers, pinewood derbies, cornhole tournaments, supply drives and farmers’ markets, all to benefit nonprofits and foster community engagement.

“Giving back is more than writing a check for a donation,” Rome said. “To me, giving back is to actively stay involved and participate in local community events on a personal level to make a difference.”

His most rewarding contribution is the Gary Rome Academic Achievement Award of a Brand New Hyundai Car Giveaway, an annual program that rewards one deserving Holyoke High School senior with a new car. “It inspires the youth of our inner-city to strive for excellence with grades, attendance, behavior and to participate in extracurricular activities,” he said.

Rome and his wife, Jane, have three children. He was nominated for the TIME Dealer of the Year award by Robert O'Koniewski, executive vice president and general counsel of the Massachusetts State Automobile Dealers Association.